The appendix is a long narrow tube (with few inches in the length) which attaches to the first part of colon. It is generally located in lower right quadrant of the abdominal cavity. The appendix will produces a bacteria destroying protein known as immunoglobulins, which will helps to fight infection in the body. Its function, however, is not very essential. People who had appendectomies wont have an increased risk towards the infection. Other organs in the body will take over this function once appendix has been removed. 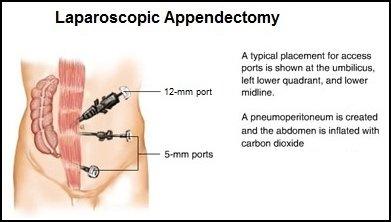 Appendicitis is one of the common surgical problems. One out of every 2,000 people will have an appendectomy sometime during the lifetime. Treatment will require an operation to remove the infected appendix. Generally, the appendix was removed by an incision in the right lower abdominal wall.

In every laparoscopic appendectomies, surgeons will operate by a 3 small incisions ( - inch) while watching enlarged picture of the patients internal organs on the television monitor. In some of the cases, one of the small openings can be lengthened to complete the whole procedure.

Results may vary based upon the kind of the procedure & patients overall condition. Common advantages are: